At home on the outskirts of London, my Mum had a blue Topper called Sprint. As a 6 year old, I loved to huddle down by the daggerboard case and listen to the water gurgle through the self-bailer. My little sister would fall asleep on the other side and Mum would helm; I'm amazed that there was room for all of us. 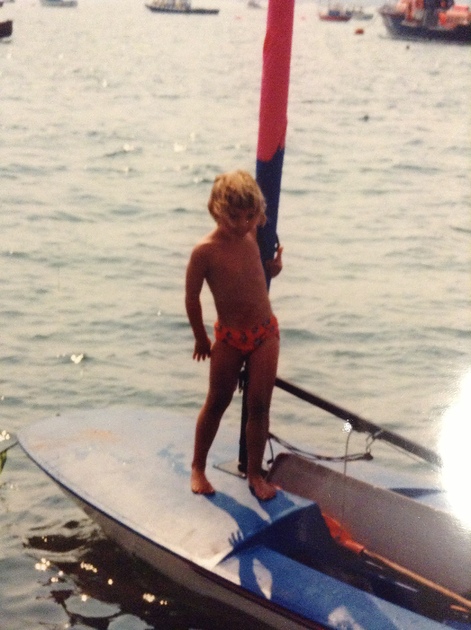 That blue Topper became the backbone of my childhood, as I spent much of my free time skirting around Queen Mary Reservoir. I counted down the days to our annual two week holiday at Challabourgh Bay (Devon); pottering around Burgh Island with pit stops at the Pilchard's Inn was heaven!

After a trip to Totnes at the age of 10, my imagination was left running wild. Pete Goss was preparing to race the 120 ft catamaran 'Team Phillips' non-stop, solo, around the world. Lying in a replica bunk, I began to wonder…could I do this too?

Yet despite my longing for an ocean life, I was land locked and like most kids, had other hobbies and commitments – karate, ballet, tap dancing, gymnastics, diving – yet it turned out I hated having to perform in front of other people; my confidence came from being on the water.

Finally, at the age of 14, I'd found the courage to race dinghies and loved it. Competing on the RS Feva and Laser circuits meant regular training in the Southern Zone Squads and racing in events on the open sea.

In my teens, I spent some time sailing the 29er and RS 700, before starting my Speech and Language Therapy degree at the University of Reading. I became the Commodore of the University's sailing club and raced regularly on the Team Racing circuit.

While studying in Reading, I was eager to find a way onto bigger boats. In 2010 the door into the yachting world opened; I was selected for the British Keelboat Academy (BKA), where I spent two years racing onboard J/80s, J/109s and a Farr 45.

It was quite a learning curve at first – the rest of the squad had grown up sailing yachts, racing on the Solent and cruising to France. Yet I couldn't even claim to have gone offshore, had never used a winch and didn't know anything about 'racing around the cans'. Yet by my second year, I had captained a young team in the J/109 'Yeoman of Wight', finishing 3rd at the 2012 Commodore's Cup. I discovered what I loved best; project management and offshore racing! 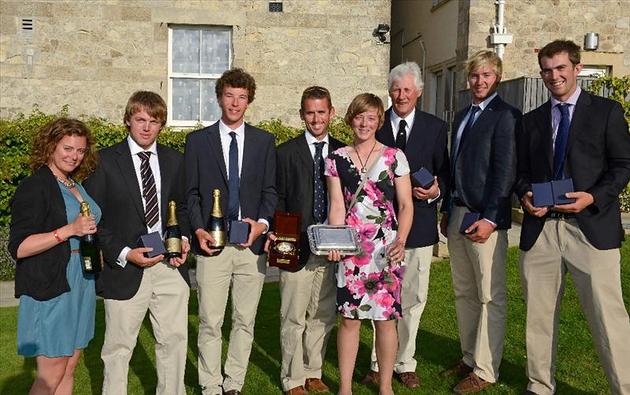 During my time with the BKA I also worked for Blue Box Sailing, onboard a Clipper and Whitbread 60. Everything about these ocean race yachts fascinated me; what on earth would it be like to sail such a size of boat alone?

I was to get my first taste of short-handed sailing during my graduation year at University.

Battling my way through the Artemis Offshore Academy selection trials in 2012, I was the only woman selected that year, and began to race a Figaro II on the RORC double-handed circuit. By June (now as a qualified Speech and Language Therapist), I had gone on to work as assistant to Academy's Sailing Project Manager at OC Sport. Over 15 months I learnt all I could about logistics, project management, race preparation, sponsorship and public relations.

Discovering more about the solo ocean racing scene, I knew what my heart was set on; the illustrious, 4020 nm solo race across the Atlantic, known as the 'Mini Transat'.

Selected for the Artemis Offshore Academy

Once my internship and time with the Academy ended in September 2013, I was faced with a dilemma; pursue my career in Speech and Language Therapy, or put everything on the line and pave my own way into offshore racing?

Making my decision, I hopped onto a ferry in time for the start of the 2013 Mini Transat. My partner and a number of close friends were competing, making the race a particularly nerve wracking one to follow!

I had confirmed the loan of a 10-year-old Pogo 2 to use after the Transat, and so set about working out how I would qualify for the race, what the minimum budget would be, how I would 'market' my campaign and which companies I needed to approach to pull it all off.

After many revised sponsorship proposals, I struck gold at the Southampton Boat Show, convincing 15 companies to join me on my two year project. Most importantly, I secured a main sponsor; Hudson Wight Performance Sailwear, who were to fund a third of the running costs. 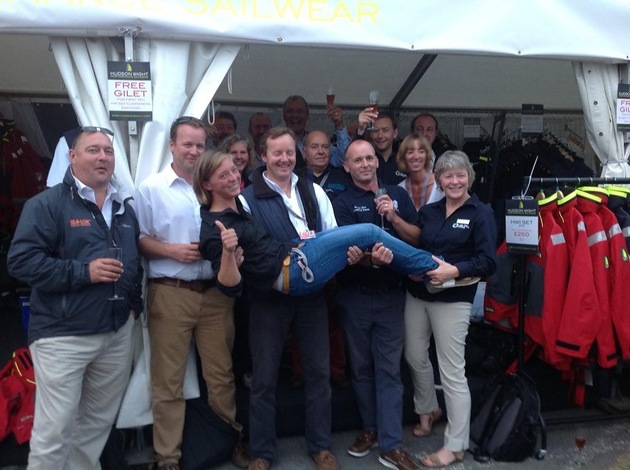 This allowed me to head out to Lorient, France in January 2014; one of the main hubs for offshore racing. Not knowing anyone and without much offshore experience (my total solo hours amounted to a 50 mile delivery from Weymouth to Cowes), I was in at the deep end!

I was back and forth from France frequently, having to meet with potential sponsors, hold fundraising talks and chase much needed equipment. It was well worth the effort - I loved every minute of training with Lorient Grand Large (both on and off the water), and marvelled at the IMOCA 60s, Class 40s and multihulls that lined the docks.

As the season progressed, I picked up further sponsorships, and qualified for the 2014 Les Sables – Azores – Les Sables race; a 2600 nm solo event, and my first major offshore race. Despite the age of the boat and limited budget, I finished well with the boat intact; minus a spreader!

The following year was much harder. I was really struggling to find the financial support for the Mini Transat, and had to spend so much time chasing equipment, promoting the campaign and meeting sponsor commitments that time on the water was minimal.

As the start of the race approached the stress increased – the boat needed new sails, new electronics, a new fuel cell, new ropes and a new mast if I was going to get safely across the Atlantic – such expensive equipment quickly ate up the remainder of my life savings.

Luckily, just two weeks before departure, I was able to raise the final £5,000 needed through a crowdfunding campaign, to cover the shipping of the boat back, the insurance & food for the race. Thank you so much to everyone who donated - I honestly would not have made the Transat otherwise!

Despite the hardships, hours of loneliness, sleep deprivation and sheer stress of managing a racing campaign (let alone the solo sailing part!) I have fallen totally in love with solo offshore sailing.

It is everything I have ever dreamed of – challenge, adventure and discovery – and the chance to compete, the culmination of a life time's work.

Heartbroken since the end of the Transat (633 had gone to new hands), I have been working manically to get a new campaign started. I'm hoping to compete in the 2017 TWOSTAR and the Transat Jacques Vabre on a Class 40, culminating in the 2018 Route du Rhum; three classic races which will significantly increase my knowledge and skill set through a professionally run campaign. 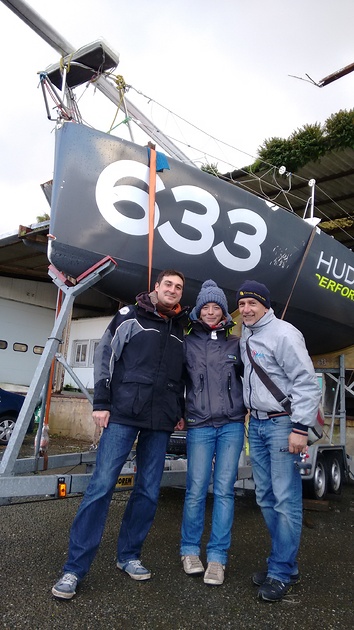 In the meantime, I'm getting some vital experience on a Class 40 with Dream or Two Sailing, competing in a number of double-handed races, and also on the Artemis IMOCA 60; including three days of attempting to sail the boat solo!

Alongside this, I am also racing a RS800, hoping to compete at the Europeans this year. I'm totally addicted to skiff sailing and can't get enough of surfing the waves; although capsizing has been a bit of a shock to the system, I've gotten to used to boats with keels... 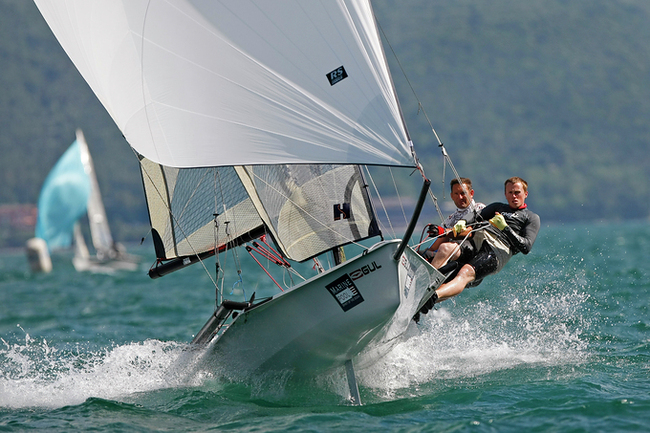 "To accomplish great things, we must not only act, but also dream; not only plan, but also believe." - Anatole France