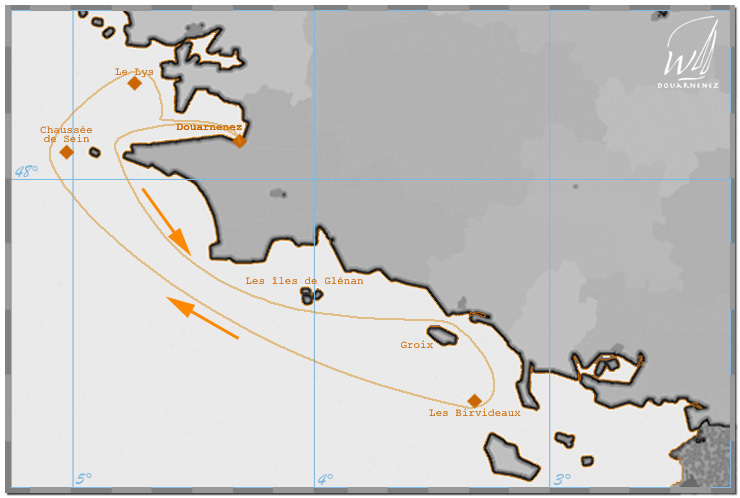 It's Thursday morning and I have just had a quick read through my notes for the race starting at 1500 today - the Marie Agnes Peron, a 220 nm solo sprint.

Starting from Douarnenez, we race overnight to Ile de Goix, then on to a lighthouse (Birvideaux) that sits on the plateau between Goix and the Quiberon peninsula, before heading west again and outside the Chausse de Sein. Instead of sailing directly back into the bay, we then have a dog leg up to a south cardinal mark, before rounding (and avoiding the shallow patches) of Basse Vieille - we then finally cross the finish line just off the entrance to Treboul, hopefully in the early hours of Saturday morning.

The race is run by a voluntary organisation, the Winches Yacht Club, hosts of both the 2013 and 2015 editions of the Mini Transat, as well as the MAP and Mini Fastnet races. These races seem to be the most social on the calendar, while also being set in what I think is a really beautiful part of Brittany. I was here this time last year, celebrating my 23rd Birthday just before the start of the 2013 Mini Fastnet - my first proper offshore race and the first time I had been properly involved with preparing a Mini for a long offshore.

It is fantastic to be back here with the same boat (now with me as the skipper and new graphics!), and I am really looking forward to the race.

It is going to be intense with the light forecast (4-15 knots from the NE), hot temperature and strong tides. There isn't much time for sleeping, and we will all need to be very alert to avoid the numerous fishing boats and pots dotting the coast line.

There are also two brand new Minis out for the race; the L'Ofcet (Ian Lipinski) and Davy Beaudart's evolutionary Rasion  based design (865). I am really looking forward to seeing these boats get going, and am interested to see how the L'Ofcet performs as it hopes to become a new series class.

Right, time to go and put my new jib on (made by Woody at Solo Sails), and make some sandwiches before the briefing at 10.30.

You can follow live on the tracker here: http://yb.tl/map2014