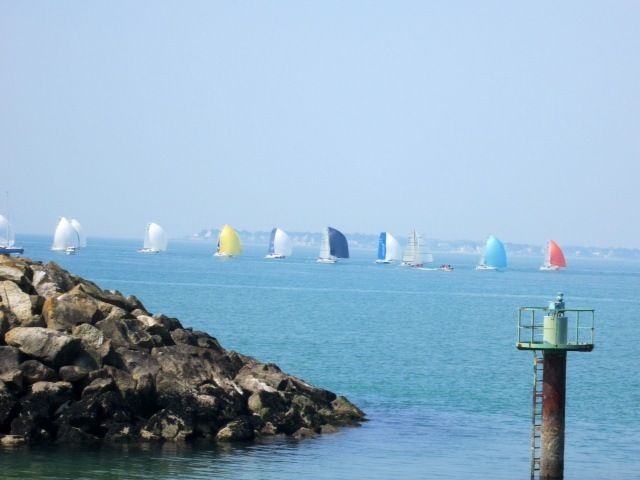 Considered one of the toughest races of the year, the Pornichet Select 6.50 is a 300 mile solo race starting from Pornichet, rounding Belle Ille before heading down to Les Sables d’Olonne, then going back up to Ille de Groix before the final stretch home to Pornichet. Considering the large amount of coastline encountered (hopefully not literally!) during the race, there is little time for sleeping, and a lot of VHF check-ins and time noting around marks to be made.

I was really excited having made it to the start line; this was going to be my first solo race and longest solo navigation to date. I had been apprehensive about it, having read horror stories of boats hitting rocks, people getting lost and gusty wind conditions- but having raced the Lorient BSM at least I had been around the Islands before! 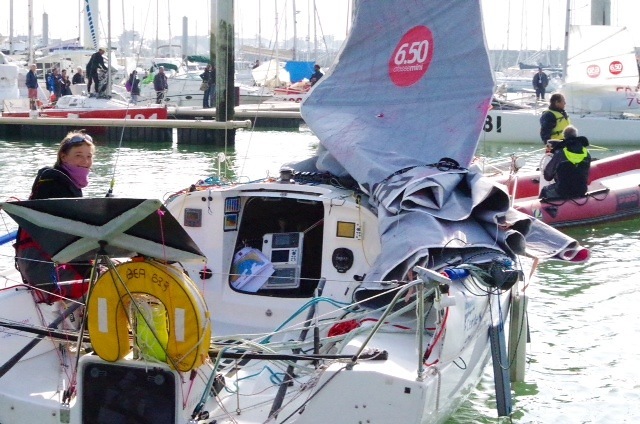 I was pretty busy in the week leading up to the race, catching up on admin – mostly tackling the mountain of invoices I had gathered- and also planning some fundraising events for the season with my Title sponsor. Hudson Wight. It was good also to touch base with Sta-Lok, English Braids, Solo Sails and Dimension Polyant, who I can’t thank enough for their support this season.

I made it back down to Pornichet on Thursday morning, managing to pass the security checks very easily, and soon enough I had the race documents; in English and French! I took some time to have a French working lunch (free wine included), catching up with Hudson Wight via Skype, for our weekly call.

It took some time to read and digest the race instructions, and there were a lot more official waypoints than usual forming the course. I spent the next remaining hours before the race laminating all the important information, finalising the navigation and cleaning up the big list of waypoints in my GPS. There were numerous briefings and two dinners to go to, hosted at the Petite Mousse (The little cabin boy) – thanks to Caroline from Classe Mini for the translations, which made getting organised for the race a bit easier! 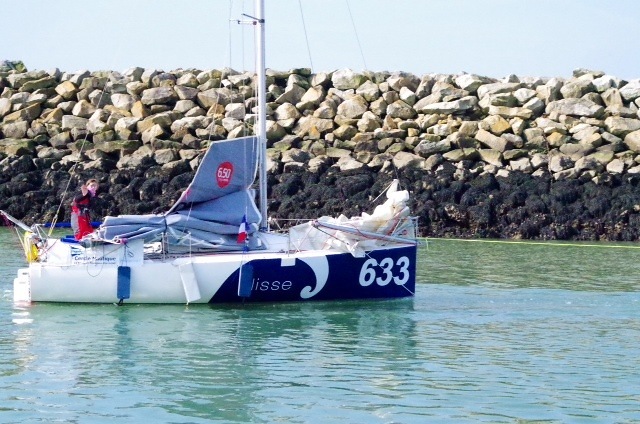 Start day came and we were greeted with a light breeze, off the dock at 10am with the start at 1300. My family had all come over to see me off, which was really lovely; they had a good British presence with flasks of tea and cake while watching the racing!

We had a downwind start, with a short course to race around the Bay of Pouligen before heading out to open sea. I was in the first group of four to cross the line, reaching the first mark in 6th place- losing my nerve, I dropped my kite to soon and lost a few places, but how exciting to be in the top group! 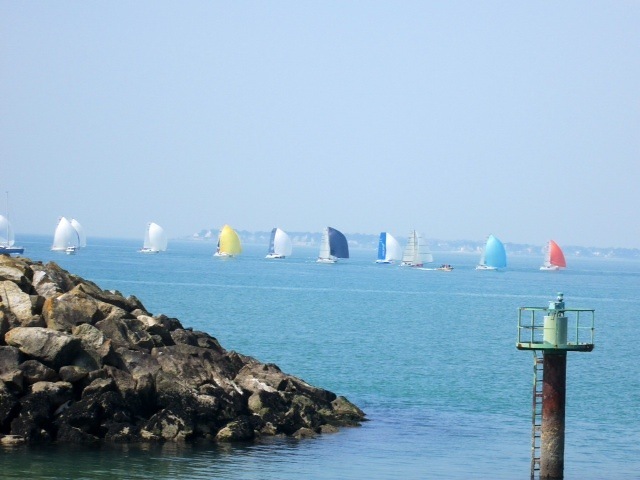 It was then a reach to the next mark before a beat out of the bay, where we had some great close racing, short tacking up the shore to get out into open water. During the night I approached the plateau Birivideaux, where we had to round a small lighthouse built in the 1930s which stands between Groix, the peninsula of Quiberon and Belle-Ile. It was pretty good fun getting up to the plateau, with the wind gusting up to 18 knots. There was no time for sleeping with Belle Ille to the left and the rocks off Quiberon to the right!

Rounding the lighthouse in a small pack, it was then time to start the downwind leg to Les Sables, roughly a 100 mile leg. Launching the big spinnaker, it was fantastic to be sailing in the night with the moonlight silhouetting the kite and the masthead lights of the other boats dotting the path to Les Sables. Unfortunately while setting up for a gybe away from Belle Ille, I must have had the pilot settings wrong as the boat started to roll into a gybe, to quickly for me to put it back on course as I was midway through hoisting the jib with the idea of avoiding getting a wrap in the spinnaker….which was just what happened

Crumbs, this was not good in 18 knots of wind with a very large rock to the left of me, and a fleet of boats rapidly moving away with the kites filled. I managed to unfurl the mess, so got ready to gybe back – but somehow the spinnaker sheet had caught in the clip of the jib, so when I did so, there was another mess to deal with. The wrap got pretty bad and there was nothing for it but to gybe back with a flapping kite to just get away from the Island. Unfortunately the wrap had locked the halyard so I couldn’t drop the kite, or doing anything really, after trying and trying and getting pretty hot and bothered doing so. I have never been up the rig solo before and decided now was not the time to try, in the pitch black in the early hours of Sunday morning.

I made the decision to head directly to Pornichet, which was a comfortable reach, rather than continuing for 100 miles with a kite wrapped around the forestay. I considered stopping on Belle Ille, but the two ports are on the North East coast (Le Palais and Sauzon), and I was on the South-West side, known as the Cote Sauvage – the wild coast! I knew I wouldn’t be able to get upwind efficiently – even with the storm jib rigged on the babystay – and did think about continuing to Les Sables d’Olonne where I could have stopped there and continued, but with 100 miles to go and not wanting to risk losing a very expensive spinnaker, I abandoned. 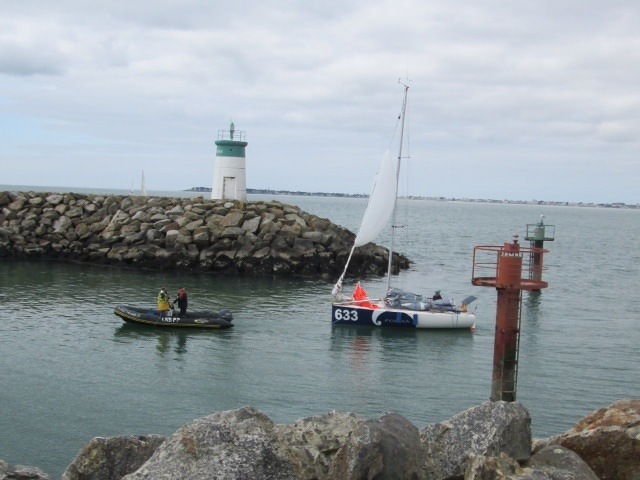 It was pretty miserable heading back to Pornichet making just 2 knots over ground, knowing that I was missing out on some great racing and the rounding of Nouch Sud, the mark used as the finish line in the Vendee Globe. It was at least a pretty coast line to look at, the sun was beating down and I got some sleep in, arriving back in Pornichet at about 1pm in the afternoon on Sunday. 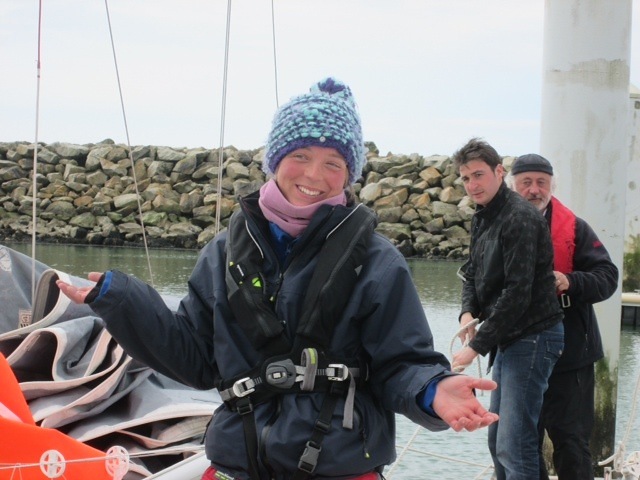 The disappointment of not finishing the race is still hanging with me; I was really looking forward to finishing with the other skippers and completing my solo qualification miles for the Azores race. Of course I still learnt from the experience, managed to practice some micro-sleeping and met some great people – both newcomers to the Mini fleet and the race organisers at CNBPP.

I am now preparing the boat to sail back to England this weekend. I have a lot to look forward to; the boat is being branded, my new jib is arriving from Solo Sails, I will finally be able to catch up with friends (having spent a lot of time alone in France recently!) and I will have another crack at getting my qualification miles for the Azores ticked off- with the 300 mile solo race from Hamble to La Trinite.

So, onwards and upwards…à bientôt!