Plastic Pollution - a problem facing us all 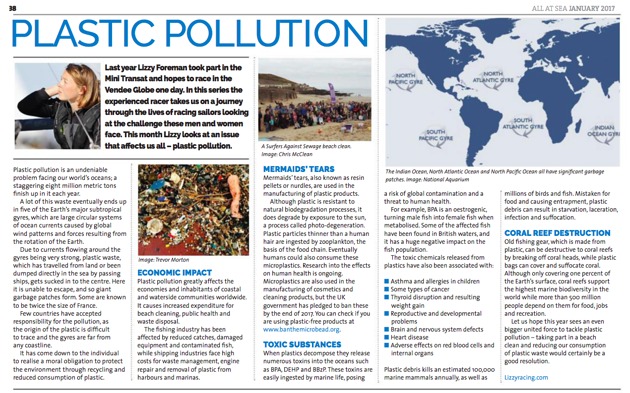 Last year Lizzy Foreman took part in the Mini Transat and hopes to race in the Vendee Globe one day. In this series the experienced racer takes us on a journey through the lives of racing sailors looking at the challenge these men and women face. This month Lizzy looks at an issue that affects us all – plastic pollution.

Plastic pollution is an undeniable problem facing our world's oceans; a staggering eight million metric tons finish up in it each year.

A lot of this waste eventually ends up in five of the Earth's major subtropical gyres, which are large circular systems of ocean currents caused by global wind patterns and forces resulting from the rotation of the Earth.

Due to currents flowing around the gyres being very strong, plastic waste, which has travelled from land or been dumped directly in the sea by passing ships, gets sucked in to the centre. Here it is unable to escape, and so giant garbage patches form. Some are known to be twice the size of France.

Few countries have accepted responsibility for the pollution, as the origin of the plastic is difficult to trace and the gyres are far from any coastline.

It has come down to the individual to realise a moral obligation to protect the environment through recycling and reduced consumption of plastic.

The fishing industry has been affected by reduced catches, damaged equipment and contaminated fish, while shipping industries face high costs for waste management, engine repair and removal of plastic from harbours and marinas.

Mermaids' tears, also known as resin pellets or nurdles, are used in the manufacturing of plastic products.

Although plastic is resistant to natural biodegradation processes, it does degrade by exposure to the sun, a process called photo-degeneration. Plastic particles thinner than a human hair are ingested by zooplankton, the basis of the food chain. Eventually humans could also consume these microplastics, and research into the effects on human health is ongoing.

Microplastics are also used in the manufacturing of cosmetics and cleaning products, but the UK government has pledged to ban these by the end of 2017. You can check if you are using plastic-free products at www.banthemicrobead.org.

When plastics decompose they release numerous toxins into the oceans such as BPA, DEHP and BBzP. These toxins are easily ingested by marine life, posing a risk of global contamination and a threat to human health.

For example, BPA is an oestrogenic, turning male fish into female fish when metabolised. Some of the affected fish have been found in British waters, and it has a huge negative impact on the fish population.

The toxic chemicals released from plastics have also been associated with:

Plastic debris kills an estimated 100,000 marine mammals annually, as well as millions of birds and fish. Mistaken for food and causing entrapment, plastic debris can result in starvation, laceration, infection and suffocation.

Derelict fishing gear, which is made from plastic, can be destructive to coral reefs by breaking off coral heads, while plastic bags can cover and suffocate coral. Although only covering one percent of the Earth's surface, coral reefs support the highest marine biodiversity in the world while more than 500 million people depend on them for food, jobs and recreation.

Let us hope 2017 sees an even bigger united force to tackle plastic pollution – taking part in a beach clean and reducing our consumption of plastic waste would certainly be a good resolution!