From the yard to the sea 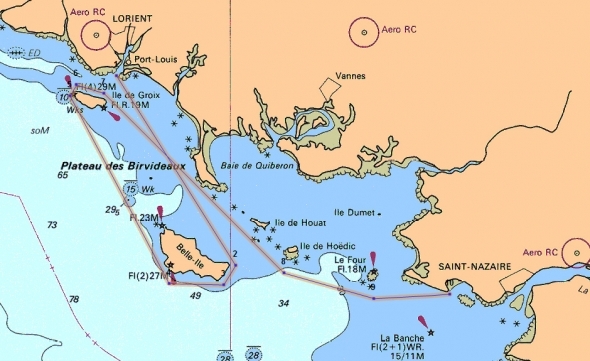 Over the weekend 5-6th April, I competed in the first Classe Mini race of the season; the Lorient Bretagne Sud Mini. It was a 115 mile sprint from Lorient, around Belle Ille and Ille de Groix, finishing in Pornichet. 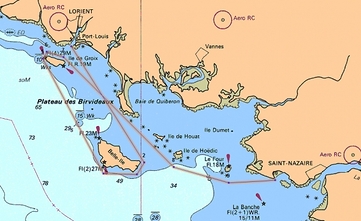 I had a lot on to make the start line for the race, with the boat returning from the yard just three days before the start. The antifoul had to be redone, some stanchions had to be replaced, a large crack in the deck had to be repaired, plus some developmental work to the electronics was on the list; I had the position of the instruments moved from the mast to the centre of the cockpit, an AIS / VHF splitter attached and a general tidy up of all the wires on the boat. 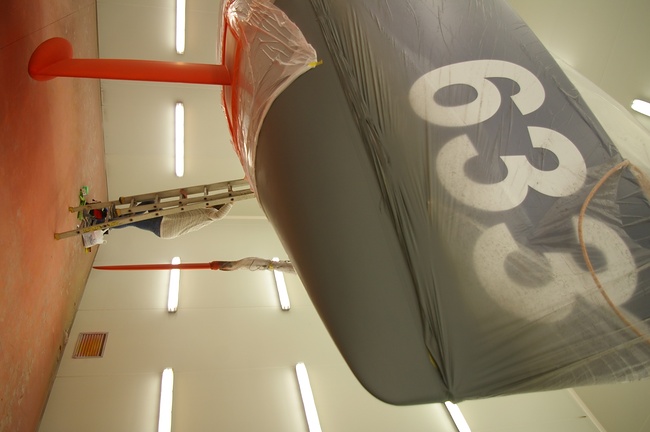 On top of that, I was busy making pad eyes, new stacking nets (thanks to Dimension Polyant for the Dacron, and for Mum’s help with the sewing machine!), quick release rigging pins, and other small jobs that take a long time to do. I was pleased to get the new batteries wired up, and my NKE electronics got an upgrade – I have had trouble with the apparent wind mode, and a rather scary issue of the whole system shutting down when I turn the autopilot on.

One of the worst jobs of the week was refitting the solar panel support and rudders, which require screws, nuts & bolts to be attached in some very awkward places. Needless to say I lost a lot on the floor! The rivet gun made a guest appearance on numerous occasions (for the mast & boom), and  I got into a real mess with some gel coat, which unfortunately then left its mark on everybody who came close to the boat over the next few days! I was lucky to have both Florian (who would do the race with me) and my Mum down for a few days each to lend a hand with the boat; a huge thank you to them. 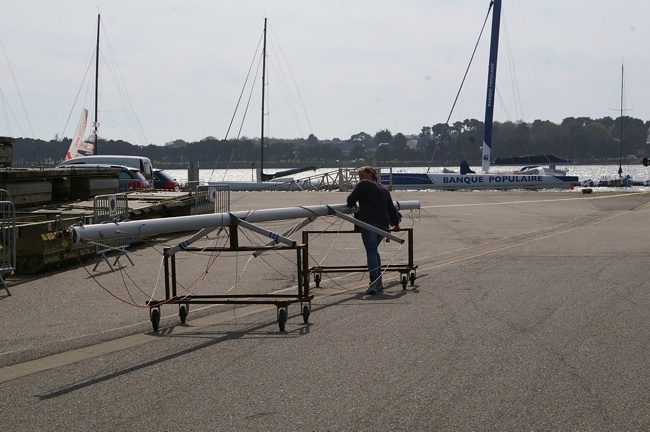 Pushing the mast to the crane

Having had a good look at some well set up Pogo 2s, I also had a list of improvements I wanted to make to the backstay, bowsprit and reefing systems – these jobs will get completed when I return to England, thanks to the support from English Braids. I simply ran out of time to do any more changes to the boat before the first two races…

Launch day eventually came, which was an efficient process with the help of Gildas, who runs the yard in Lorient. Unfortunately just as I was stepping the mast, a dog fell off the harbour wall and I had to run to its rescue; which required trying to explain, in French, that there was panicking dog in the water to the Capitanery. The dog, Domino, eventually found some rocks and I clambered down to save him!

The next few days where then all about passing the security checks, setting up the rig & finishing off the little jobs on board. I didn’t have much time to focus on the navigation for the race – having to do it late Friday morning and then at 5am on race day – which wasn’t really ideal! Anyway I managed to pull together a sort of road book, but as I can’t afford the navigation software at the moment, I only had ‘Adrena free’ to use; which basically just gives you a yellow splodge for land and some useful bearing lines between waypoints.

The double handed race to Pornichet started with 6am breakfast at the Submarine base, with an 11:00 start planned on Saturday morning. Thick fog blanketed the course, but we managed to get a good start, rounding the first mark of the course in 11th place. It was really exciting to round the top mark with Jonas, Jean-Marie and Tanguy, who I have been training with at Lorient Grand Large.

Unfortunately during the first beat we were lacking speed, not helped with the vintage 2007 Transat sails that I had up, and we got over taken by a few boats. This was really frustrating! 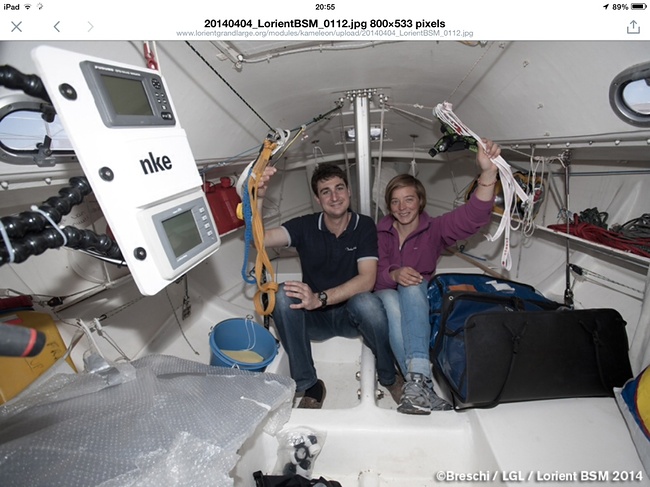 However making our way along Belle Ille, we pulled back up to 12th place, just as the fog cleared revealing a lot of the fleet to leeward and behind us. Being in the top pack of the fleet was very exciting, I’ve never had such close racing with a fleet of 50 mini’s before – we were still struggling with boat speed but had managed to hold on to some places. At this point it was decision time whether to hoist the genneker or not – we went for it, gained some places but also quite a bit of distance to leeward – being a 2007 genneker mine is pretty huge (the largest of all the boats in the Lorient training group!) – and we dropped to 16th just off Quiberon.

The fog then loomed back just as we had to make our way around the bottom of Belle Ille. Some boats were short tacking close the shore, others stayed further out – we made a few tacks in to the shore, but it was pretty scary to see rocks suddenly looming out of the mist! We had some good racing here though, but it was at this point that I suddenly felt really tired. I think I fell asleep down below for a bit, waking up to see that boats were passing inside us with their gennekers up while we were still on the jib. Oops! With a bit of a slow sail change from genneker and then to big spi, we lost some more ground and were out of touch with the main group. 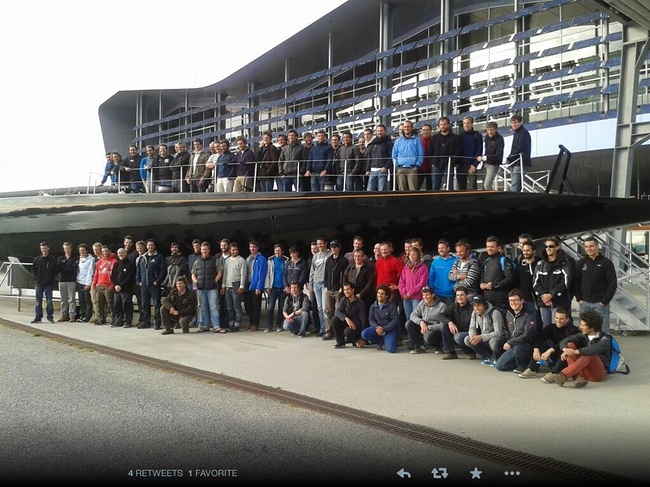 All of the skippers

Rounding Ille de Groix turned out to be pretty disastrous as you can see in the screen shot below; it was an extremely dark night so we couldn’t see any lights on the island at all, and we had a problem with the bowsprit which meant we couldn’t gybe back as soon as we had planned…this put us in the back pack for the rest of the race, and I was still tired during the last leg to Pornichet having had such a busy time getting the boat back together.

The race was won by Giancarlo Pedote onboard the prototype Prysmian, with co-skipper Sebastien Josse, skipper of Edmond de Rothschild, the Multi 70. In the Series division, Tanguy Le Turquais onboard Dame Argo took 1st place with co-skipper Renaud Mary, both of whom raced the 2013 Mini Transat finishing a brilliant 5th and 4th.

I thoroughly enjoyed the race and am fully motivated for the 300 mile Pornichet Select starting this weekend- now I know I can be in the top group, I need to make sure I can stay switched on, energised and ready for all those sail changes! I’m really looking forward to my new Solo Sails when I return to England, making do with my vintage ones for now.

I’ve packed the food, collected my spare autopilot which had to be repaired, and began to pack the van; after the Select I’m delivering the boat to England for some fundraising events and the UK Solent, racing from Hamble to La Trinitie. I’m a little nervous about my first ever solo race starting this weekend, and my longest solo navigation to date (the furthest I’ve done solo is 60 miles) – it’s bound to be a good learning experience with 44 boats entered; I am the only female skipper racing.

You can follow the Pornichet Select live on: http://www.ecoledevoilecnbpp.fr/pornichet-select-6-50-concurrents