Alone in the Atlantic: 2,540 nautical miles of solo racing complete 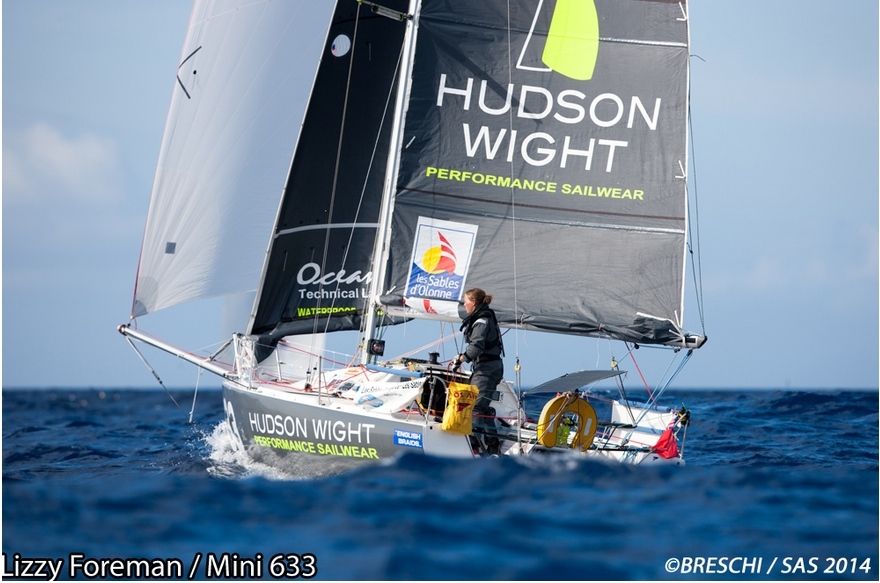 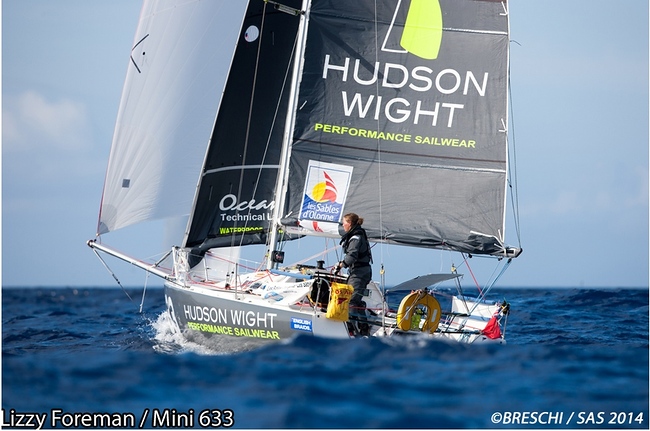 Racing my little 21 foot boat, 'Hudson Wight' (633) someway across the Atlantic has been a pretty amazing experience.  Over 18 1/2 days, we surfed endless waves, were knocked over sideways and pushed to breaking point. For hours I hugged the helm, trimmed the sails, clutched the rails to keep myself onboard... for minutes I slept, and for fleeting seconds even wept.

The Les Sables - Azores - Les Sables race was a real taste of solo ocean racing. Thanks to 'Bertha', a tropical storm that had developed at the beginning of August, the start had been delayed for 24 hours as the remnants of the hurricane was forecast to track across to Biscay and England. Despite the wait, we still faced 20-35 knots and 4-5 m of swell; hard going in a Mini, with a mast twice the hull's length.

Leaving the dock, everybody had a reef in the jib - but what kite to hoist after the gun? Feeling a bit nervous, I'd opted for the code 5, the smallest sail, as I can't reef my current medium spinnaker. I had to play a bit of catch up as bigger sails were hoisted around me; but overnight I got back in the pack, playing a relentless game of 'cat and mouse' with fellow series boats 660 and 663.

Seb (660) is just 1.9 nm ahead of me, to the North; while Jean-Marie (774) is 5.7 nm ahead and to the South. I’ve managed to hold off Benoit (663) by a good 5 nm. Overnight I’ve had gusts of over 30 knots so changed to the code 5 early this morning.''It was great fun watching the AIS like a hawk to know if a sail change, different heading or adjustment to the sheets had meant a gain or loss on the race course, while chatting to the other competitors on VHF was also very useful tactically, as well as for the company.

However, it was not always possible to know my position in the fleet; the VHF (radio) and AIS (a screen displaying the position of any boats that are nearby) have a limited range, so often I couldn't spot or contact any other Mini's if they were more than 15 miles away. This sounds like a long distance, but when your racing for 10 days at sea, it becomes relatively easy to gain or lose big miles with no weather routing, chart plotters or iridium phones onboard;

Can’t believe it, I fell asleep again and woke at 0600 on a heading of 320 degrees. I tacked quickly and the wind has now become NW, back on a course. How stupid ... that’s 17 nm in the wrong direction (North) so have made ZERO progress to Les Sables – I’ve still got 436 miles to sail! Looks like Seb has made a similar mistake. Better make sure the pilot is on compass not true wind mode next time… ''

In these windy conditions, managing to get enough sleep while still being alert enough to react to changes in wind strength and direction was not always easy;

Man, that was a difficult night, up to 25 knots. I could hardly sleep squashed in on top of the stacking bags (anchors do not make good pillows). I got thrown to the other side of the boat a couple of times. I got to just 0.3nm from the stern of Seb which was a bit worrying, because we both needed to sleep but couldn’t risk crashing the boats. I put the pilot onto True wind mode and stole some sleep, but the boat was broaching... the problem is the wind is too unstable... I did a really bad course over ground and Seb is now almost 6 miles to windward! I've got to helm again now no matter how tired I am to catch up!''

Exhaustion is a strange feeling. I had taken to lying flat on my face - it was the only way to avoid waking up with pins & needles and an unusable arm - but I felt like an empty sack. Your mind doesn't stop whirring away, but your body switches off- until you need to jump up back on deck!

It wasn't just my energy that needed managing, but the boat's batteries too. On some days the sky was very overcast, meaning that the solar panel wasn't much use. I had to plan ahead, depending on the wind strength and angle, switching between my NKE and Raymarine autopilots and computers; at times I sailed 'blind' with just the AIS running, to get enough charge in the batteries to be able to use the autopilot and sleep for a while.

I'd been having a great race right up until Tuesday, when trouble struck with a gust of 37 knots;

Yesterday afternoon, while reefing the jib, I noticed that the starboard spreader had snapped clean off. NIGHTMARE, as now can’t push the boat for fear of losing the mast. I have tied both kite halyards to the deck as extra support, the way the mast is bending has given me a fright. It looks like a 49er rig. Got 3 reefs in the main and the storm jib up to keep pressure off, as currently I’ve got gusts over 35 knots and the swell is still massive. Climbing the rig is not an option.

Still, approaching Biscay and I’m doing 10 knots over ground, the further I go the less the swell, so at least I can go back onto pilot...Feeling pretty down. Is this race over? ''

I had been anticipating finishing soon, with my best run having been 193 nm in 24 hours; instead I faced a further 3 days at sea, and although now 15th I was averaging only 6.6 knots over ground. It was difficult at first to stay motivated and not fall into 'cruising mode'; under reduced sail with no spinnaker, there wasn't a lot of trimming to do. Getting frustrated, I took some time out, relaxing in the cockpit on my comfort seat with a crossword and filter coffee. Eventually the winds eased and I could hoist the sails- full main and one reef in the jib - it was good to be moving along again, sometimes up to 10 knots!

Eventually, by Thursday afternoon I was down to the last 80 miles - but strangely, this is when I really 'got the blues';

Felt incredibly lonely the past hour. I really miss my family right now. I think it is difficult because the distance left to go is short but my speed is slow… I will arrive tomorrow morning but need to get my act together… I just can’t help feeling really down! I hate it when there is too much time to think. I’d rather be broaching out in 35 knots.''

Finally, 18 miles from the finish, the lighthouse L'Armandeche appeared on the AIS, along with a streak of yellow across the horizon; Les Sables d'Olonne! I crossed the finish line around 06.00, spotting my family standing on the famous harbour wall. At last, I'd finished the race, this time in 16th position.

It is a little strange to be back on dry land with a kettle, laptop, and a floor that doesn't bounce, tilt or jolt, but having finally had a good sleep, I am gunning for next season - qualified for the Mini Transat, my focus is on raising the funds for the race and season ahead. 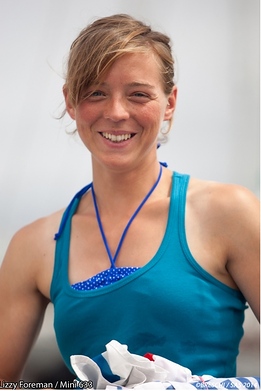 Between the 12th-21st September
I will be at the PSP Southampton Boat show. Find out more about my 2015 Transat campaign on the Hudson Wight stand, BO12.

By using the code LIZZYRACING at checkout, you will receive 10% off your chosen item while 15% of the sale will go towards my campaign.