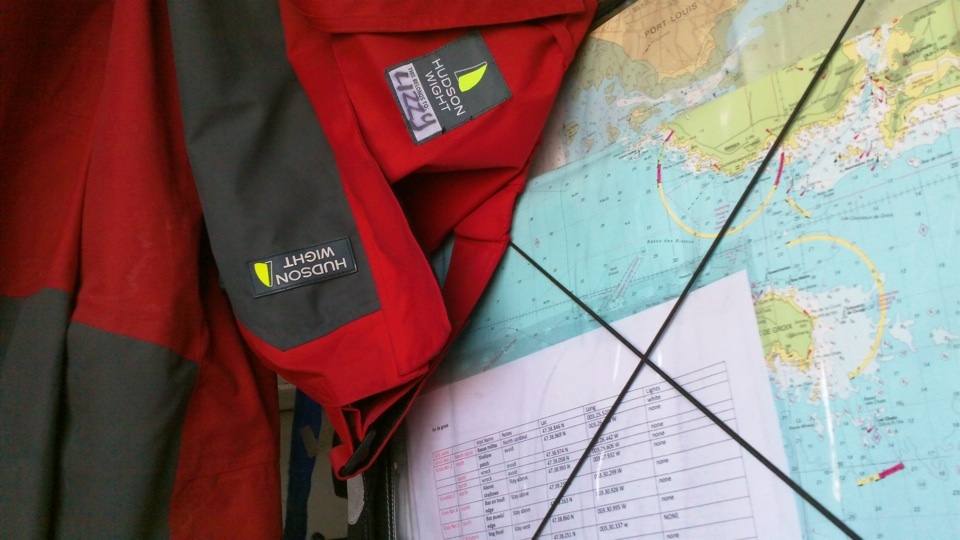 I’m so pleased so have been able to spend the past two weeks sailing the Mini solo, training with the group here at Lorient Grand Large. We are a group of 5-7 series boats, from France, Switzerland and England; I’m the only English person and the only girl in the Mini group.

A typical day starts with a briefing at 09.30 on the pontoon, and from then on its go go go… usually Tanguy has us getting into the first exercise while sailing out the river, so you have to be quick getting your sails up, fenders in and mooring lines off. On top of that there is the traffic to look out for (quick ferries and fishing boats) and a large number of rocks to avoid, as well as your fellow Mini sailors! 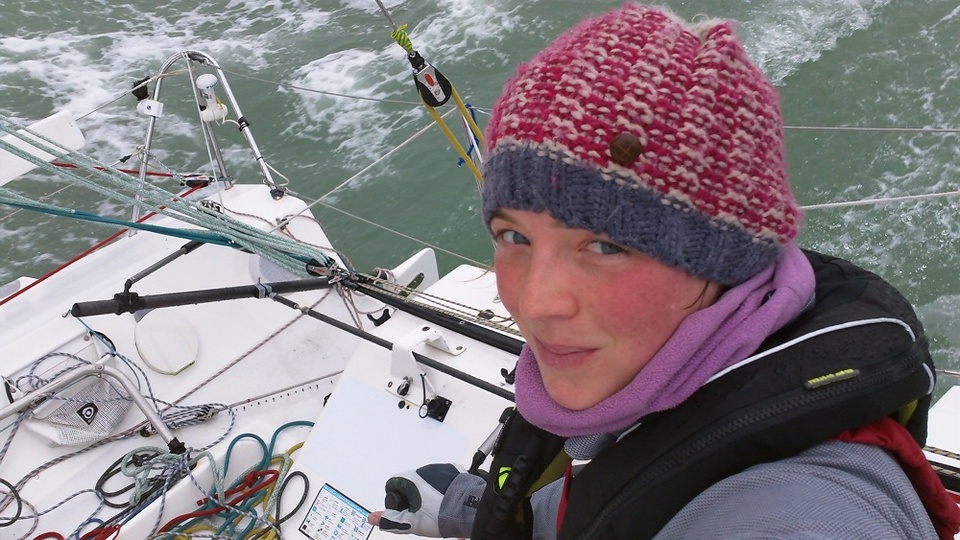 Training usually follows the same pattern of speed testing, sail changes, a short tacking exercise and then VMG sailing. There is no time to eat and barely time to get a sip of water, so the training really is pretty intense. The end of the session is wrapped up with a race back to the harbour; when I arrive I get to park next to Banque Populaire- lucky me – as with three very racy hulls to potentially hit the parking manoeuvre has to be pretty slick! 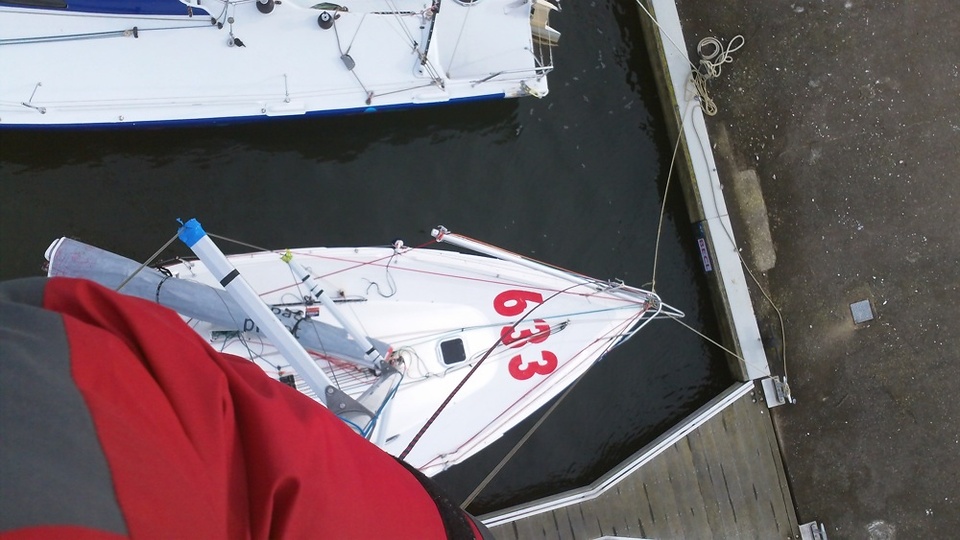 Once moored up, we have 10 minutes to pack up the boats ahead of the debrief, which sometimes lasts as long as 1 1/2 hrs. Most of the session is held in French, which took a few days to get used to; but luckily the main points get translated into English.

I think the highlight over the past two weeks has been seeing a definite improvement in my sailing; I can be quite quick upwind (in light airs at least), have just about got the hang of gybing (it is definitely easier in 5 knots than in 25!) and have somehow managed to tune my rig properly. The number of elementary mistakes I make is also gradually reducing, but I’ve still got loads to learn to get the sail cross-over right and to trim the autopilot properly. Unfortunately a lot of things keep breaking on the boat, so I’ve just got to keep it all together for another week before I put the boat into the yard for a small refit ahead of the race season. 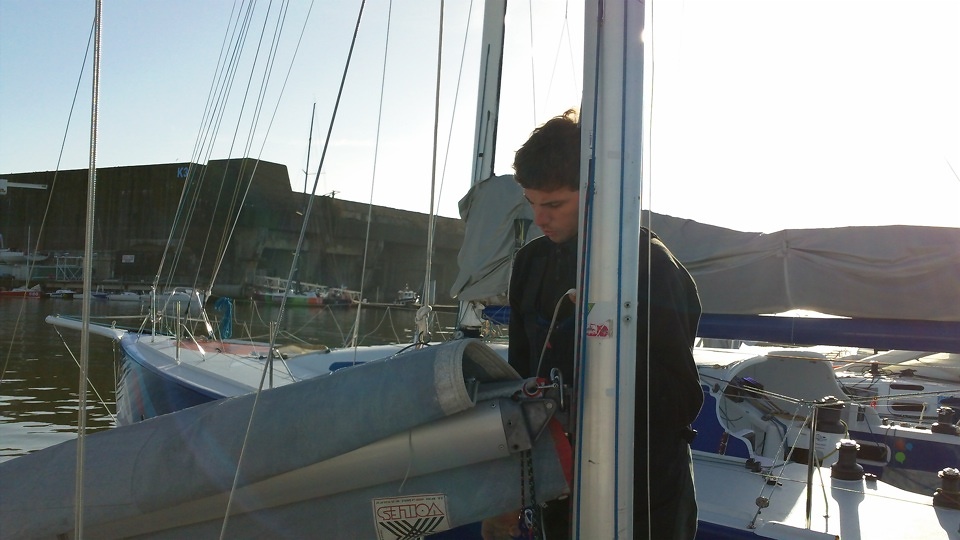 Measuring the mast rake with Tanguy Le Turquais, who finished 5th in the series fleet in the 2013 Mini Transat

The scariest moment of this week was probably when I was heading towards a large crop of rocks, with the big kite up in 25 knots and the halyard twisted around the forestay. One particular French word came to mind at the time, and the coach was soon shouting ‘’luff Lizzy, Lizzy….LUFF!!!’‘.

There are a few more dangers here than in the Solent! 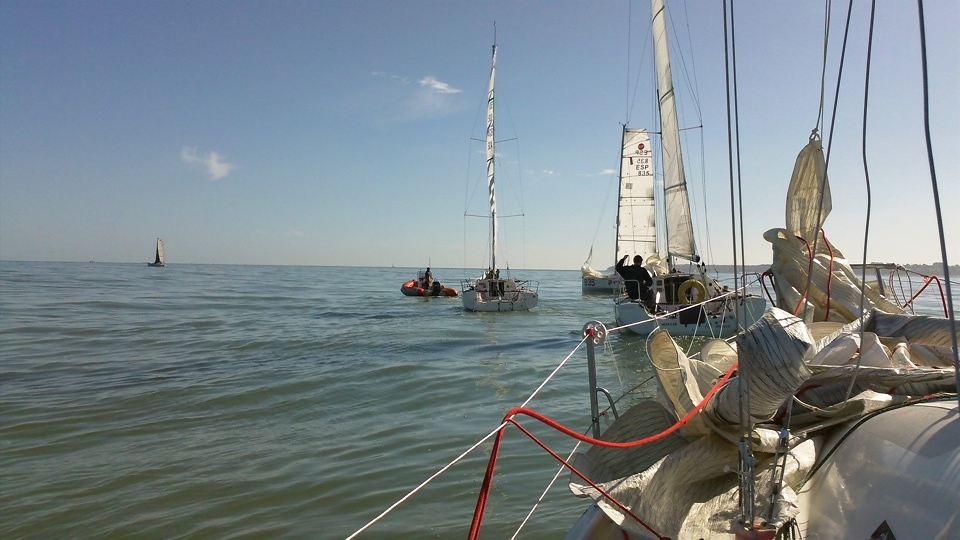 Being towed out for the day’s session

Around all of the sailing I still have a lot of ’admin’ work to do – there are always phone calls to make, emails to write and things to plan and organise until bed time every day. I’m still getting items repaired – this week I tore my solent along the foot, ripped the bolt rope in the mainsail, broke my NKE anemo and busted the cleat for the pole downhaul! When will it end?!

Luckily on the 10th March my title sponsorship with Hudson Wight was announced, which is really fantastic and a big help towards my campaign costs- it had started to be make or break for the campaign without any additional funding beyond my life savings. I’m really grateful for their support and to be an ambassador for the Hudson Wight clothing range; I’ve worn my set everyday on the Mini and I haven’t been let down.

I’ve been particularly busy this week and last getting quotes for branding the boat and sails – which takes quite a bit of organisation with two races coming up and a delivery to the UK! 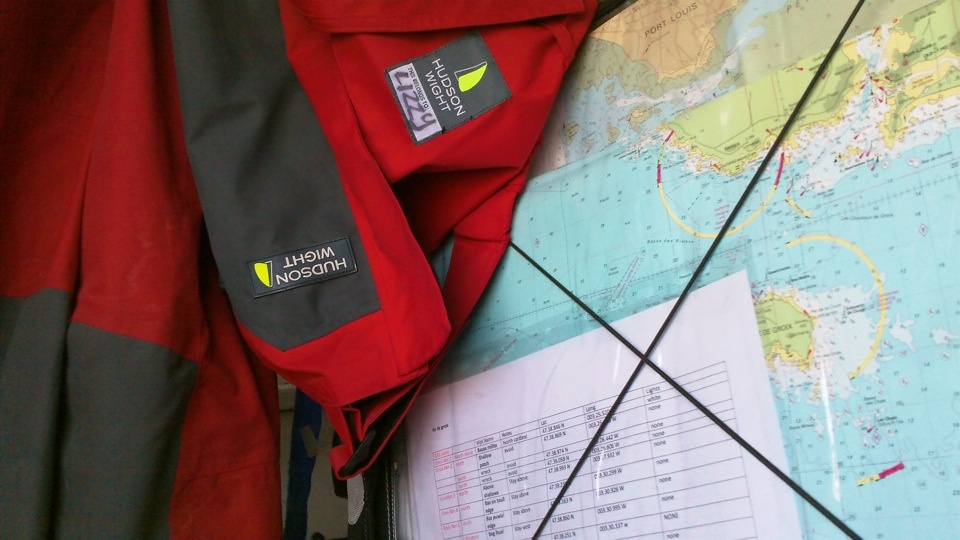 The essentials; my HW’s, charts & some waypoints!


This week I have another three days training with Lorient Grand Large and an offshore race on Wednesday night (last week’s was cancelled due to thick fog and a lack of wind) before getting the boat out of the water to go to the yard. I’ve got some reading to do to remember all of the main points from the past two weeks’ training!