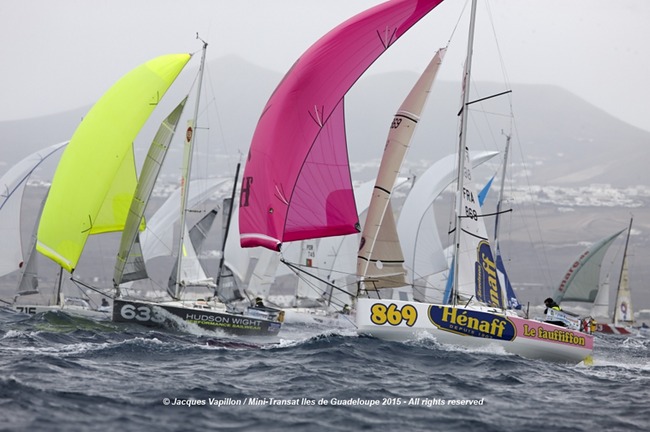 It's hard to believe that I left Lanzarote for the second leg of the Mini Transat almost one month ago, on the 31st October. For the past three months this race has been my life. Spending all my time either alone on my tiny boat, or onshore with 'Classe Mini' - one huge extended family of free-spirited, determined and wild solo sailors and a dedicated, hard working race and media organisation - has been an unforgettable experience. 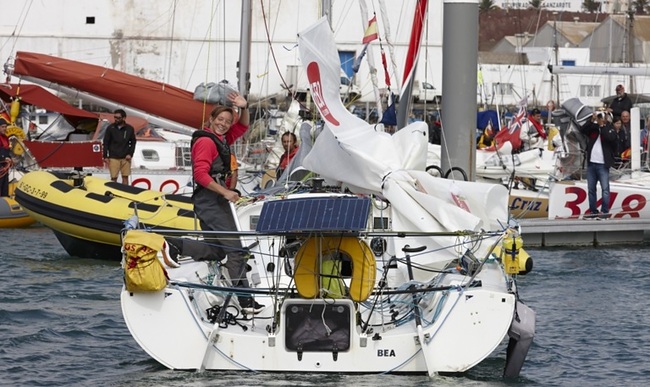 I had a great start to the second leg, 3rd boat to cross the line with my medium spinnaker hoisted.
I was ready to fight - we were forecast 20-25 knots for the first few days with a really rough sea, with most people opting for a big dive south along the African coastline.

Unfortunately just 15 minutes into the race my medium kite ripped at the clew and along the reef, rending the sail beyond repair.

Quickly, I hoisted my Code 5 - but just two hours later the dyneema holding the tack onto the bowsprit snapped. This was a huge disappointment - the code 5 launched skywards and tore right across the top and down both seam tapes. I couldn't believe it; two spinnakers down on the fist night, when never in my life have I ripped a kite before!

The sea was so rough for the following week, with the wind still 20-25 knots, that I sailed only with the gennaker, with the boat being too wet and unstable to allow any repairs. I managed to hold a top 20 placing in the fleet, despite the boat being dressed 'two sizes two small'; I knew everybody else would be flying along on the reefed medium kites, changing down only for a brief respite to sleep or to avoid a nasty accident during any squalls. 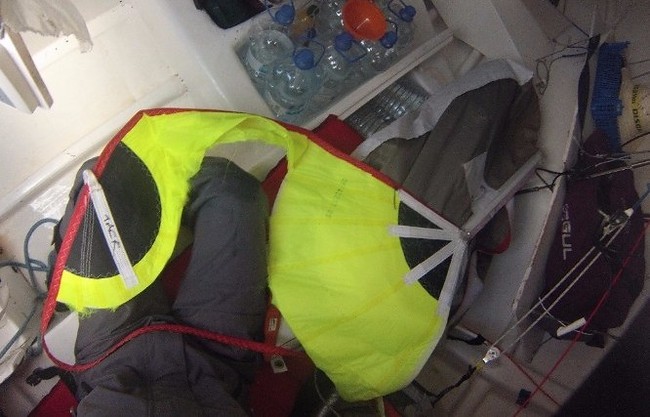 As the race progressed the reception on my SSB got better and better, thanks to a new antenna bought over from Germany by Chris, a friend and another Pogo 2 competitor. For the first time I was able to get the complete weather forecast and rankings - which made for a much more strategic and interesting race!

You can listen to a SSB broadcast from the race via the link below:

Unfortunately on the 12th November with 1000 nm to go, I lost the signal for a few days and made my biggest mistake of the race.

Despite plotting myself some new northerly waypoints and reasoning I should stay on starboard tack, I didn't trust my decision and instead dived south to get into the 'Alizes D' zone at 16 degrees N, assuming I would pick up some stronger trade winds there.

Unable to sail with my one remaining big spinnaker (too windy!), I was having to sail hotter angles and search for stronger winds with only the gennaker to keep my speed up.

Too make matters worse, that night I lost my big spinnaker over the back of the boat in a squall of 35 knots. I had been sleeping inside the boat in a peaceful 12 knot breeze, and so had not noticed the cloud forming behind me - obviously I had been asleep too long - the squall only lasted for 15 minutes, but in that time I had completely destroyed my only engine for the lighter winds. The Transat was starting to take its toll... 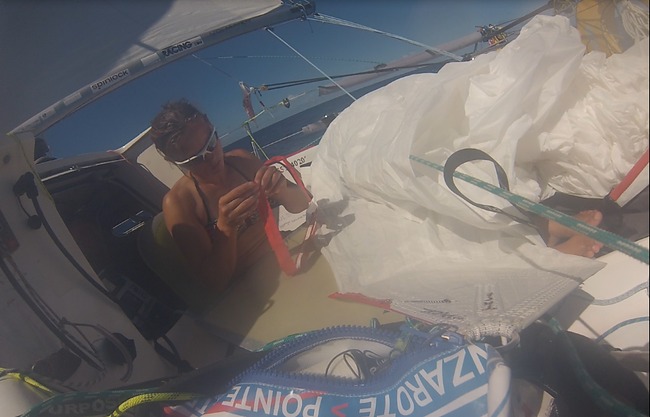 The next few days were difficult, having picked up the reception on the SSB again and finding I had lost my 100 nm lead on the chasing pack.

Absolutely furious with myself, I had my work cut out to get back on the game. The sea state had finally calmed down enough to allow me to get on with repairing my spinnakers... the chase was on! 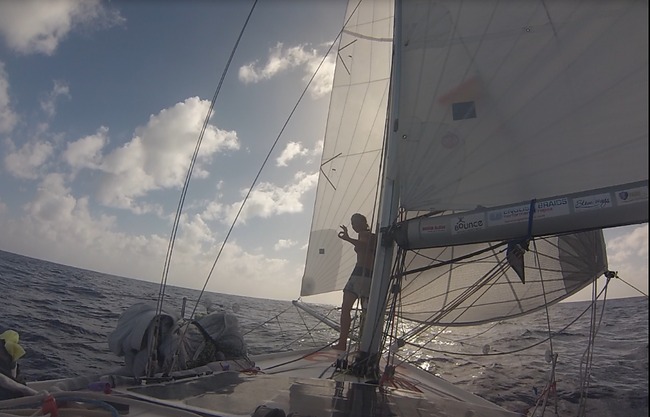 Saturday the 14th and time to celebrate; after 5 days of laborious stitching, I had completely rebuilt the code 5 having attempted to work also on the medium kite. I was able to increase my speed, but sadly, only for one night. Despite all my efforts the tack then blew the next day, taking with it the foot of the kite.

It then became a question of how much time to spend making repairs versus helming for optimum speed. My methanol levels were getting low due to so much pilot use, and the waves were still big enough that hand steering was always faster. I repaired the tack of the kite, but then decided that with the foot gone, it would be best now to just work with the gennaker; which was proving very fast when the wind reached 20 knots. 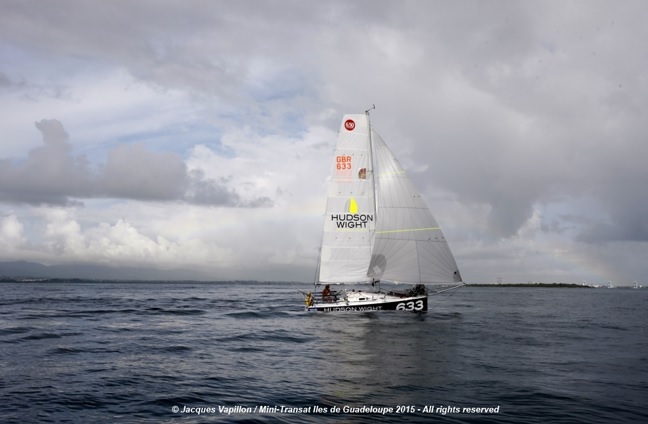 On Sunday the 15th, the first of the series boats were approaching the finish line. Making only 6 knots over ground at this point made for a rather depressing day. The half hourly task of cleaning thick weed off my rudders and even requiring a few back downs to clear the keel meant there was no respite from the sun; I suffered heat stroke and really felt quite sick leading up to the finish.

On the plus side, I was still 'in the race', 30th and with a good distance on the boats behind. It was cat and mouse with Katrina, who had only damaged her code 5. On top of the intense heat during the day, the 12 hours nights presented a constant threat of squalls. Big dark clouds approached like a stampede of wild animals. The boat would be tossed and turned, the wind doing its very best to tear my sails to shreds, and the waves threatening to wash me overboard.

I finally spotted land at 21.30 UTC on the 18th November - La Desirade, just 30 nm away. I was craving the locally made coconut ice-cream and white sandy beaches, but would be kept from paradise for hours yet; the wind dropped to just three knots, making for an excruciating finish.

I thought it couldn't get worse, but then, just 1.6 nm from the line, as the sun rose, it fell to 0.2 knots!
My Mum, Dad, Sister and some friends came out on the photographer's RIB to meet me; a welcome sight but distracting at the same time. I knew every move and tack were being judged...

Finally, the wind filled in, and with it, a huge rain cloud; I finished, sailing upwind to take 31st overall with an elapsed time of 28 days, 12 hours and 22 minutes for the entire Atlantic crossing. 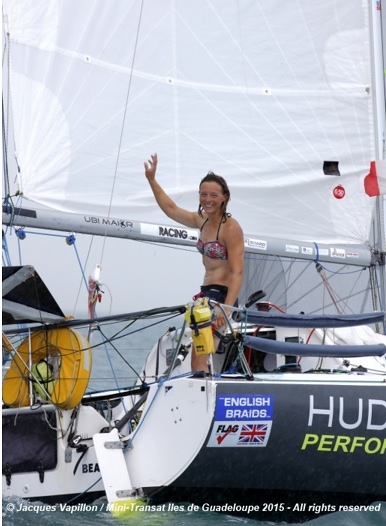 THANK YOU
For supporting me throughout my Mini Transat campaign.

It has been an incredible experience from which I have learnt so much!

Having already been through the process of confirming sponsorship,
maintaining a boat, training and racing solo,
it is a daunting task that lies ahead but one that I will tackle with passion and determination -
I absolutely love solo offshore racing and want to push myself further,
progress and ultimately finish on the podium!

It will be a busy few months ahead to get a new campaign off the ground -
until then, Merry Christmas and Happy New Year!